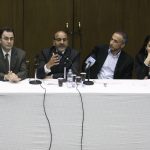 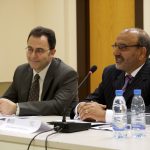 Prof Ahmad Dallal, provost of the American University in Beirut and Ebrahim Moosa at the opening of the Cartoons and Minarets conference hosted by the by the AUB and the Heinrich Böll Foundation

Beirut during this time of the year is sheer magic. The weather is fantastic and my stay at the American University of Beirut (AUB) for four nights was just enchanting. I had the good fortune to stay on campus as the guest of the AUB provost, Professor Ahmad Dallal, author of Islam, Science and the Challenge of History, which made it all the more pleasant.

I gave the keynote address at the symposium on “Cartoons and Minarets” dealing with Islamophobia and Muslim protests on Friday 1 April, 2011 hosted by the Heinrich Böll Stiftung. The evening I participated in a talk on the perceptions of the uprisings in the Middle East with Tariq Ramadan. The Beiruti crowd was attentive and exacting. I raised the question whether the uprisings were not a Black Swan moment, following Nassim Taleb’s idea that rarity, extreme impact and retrospective predictability are the features of major global events. I also suggested that communities in places like Egypt and Tunisia consider instead of the politics of identity which is limiting perhaps pursue a politics of recognition, following Jacques Ranciere. Recognition is at least of three kinds: intimate-love, abstract-law and concrete-social status. It requires a focus on aesthetics, the ability to enhance our perceptions, to feel, to sense and to touch. It was fascinating to see how people in the region began to express their feelings in such dramatic ways once they got rid of the dictatorships. A politics of recognition requires that the theater of politics never end and continuously requires discussions, debates and polemics. Perhaps a politics of love might find a way to heal the suffering of the past under dictatorships. I also said that in order to install a culture of accountability that people in the region consider the South African model of the Truth and Reconciliation Commission where the wrongs of the past are disclosed by the various actors in exchange for amnesty and indemnity from prosecution and retribution. But the wrongs of the past and those who perpetrated harm must disclose and take accountability for what they did. That is a much more solid foundation to build on than merely sweeping the ugly things of the past under the carpet. Then one will not enjoy the carpet but constantly walk on the dirt below it!