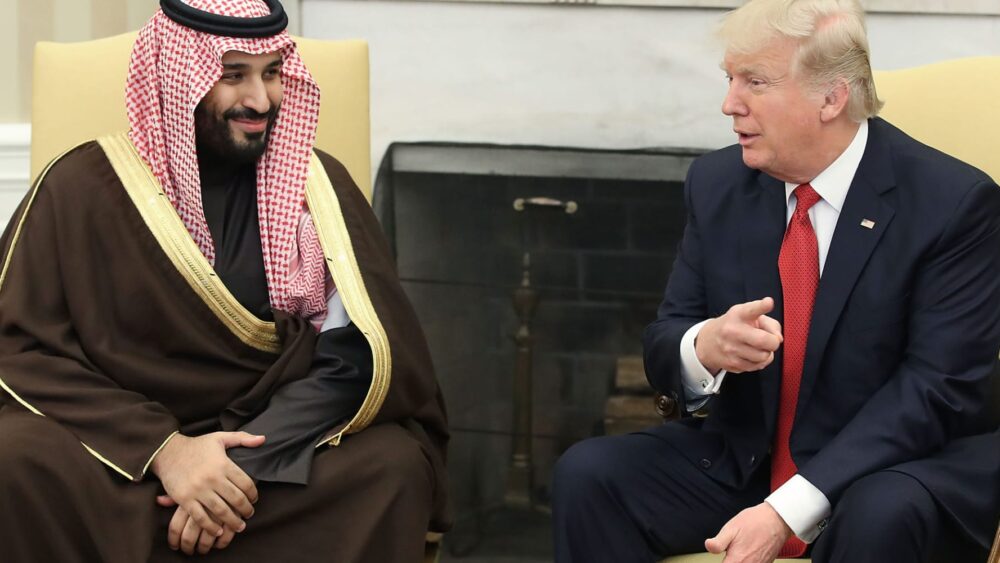 Under normal circumstances, it would be a no-brainer to welcome a forward-looking young heir to the Kingdom of Saudi Arabia‘s throne to Washington.

Saudi rulers tend to visit the U.S. when they are in their eighties, so it should be refreshing to see a younger face emerge among from one of the world’s richest countries, which is also home to Islam’s most holy places.

But we are not trading in normal circumstances.

Crown Prince Mohammed bin Salman markets himself as a domestic reformer with the ambition to unleash the potential of 32 million Saudi citizens. Given the immense social and political challenges Saudi Arabia faces, one is inclined to give MBS, as he is called, the benefit of the doubt. What if he succeeds in changing the kingdom for the better? Will MBS be the political reformer he claims to be?

But if the past is prologue and his high spending personal behavior any benchmark, he will more likely find himself in the company of bankrupt kleptocrats who harbor apocalyptic ambitions.

MBS comes to Washington with the rhetoric of a domestic reformer, but under his arm he clutches the shopping-list of a war-monger that includes the acquisition of nuclear reactors. He bought huge amounts of arms in Britain and now comes to meet with President Donald Trump, who is likely to sell him dual-use capability nuclear-reactors which will give him an ego-boost as the loyal U.S. ally in the region.

MBS, in a charm offensive, will certainly curry favor on both sides of the political aisle, pitching Saudi Arabia as the frontline defense against Iran’s regional ambitions both to his country and to Israel.

Yet, MBS has personally overseen the destruction of neighboring Yemen with a civilian death-toll of at least 5,000 and counting. And he has no plans to stabilize a poor neighbor whose chronic instability could threaten the security of his own country if this conventional proxy-war waged against the pro-Iran Houthi-led government in Yemen turns into a guerilla war.

He also brazenly announced his ambition to acquire nuclear weapons if Iran acquired them. A disastrous war in Yemen, the attempted isolation of Qatar, and ratcheting up hostility with Iran are strategic policy failures on the prince’s resume. He has no successes to show save for letting women drive in Saudi Arabia and opening up cinemas—both being long overdue social freedoms.

So what kind of thinking and future does this young prince telegraph? Some observers speaking under condition of anonymity accuse MBS of extreme narcissism, which clouds his judgment. Coupled with the conviction that he is the savior of the Gulf Arabs and Islam, MBS is a prime candidate to cast himself as a millennial figure in time to come.

Actors with such mindsets believe they must destroy the world in order to save it. And the Trump White House will unfortunately only reinforce his mindset as a strongman who has America’s backing. Saddam Hussein of Iraq and other failed figures sold such fantasy self-images to their unwitting nations.

MBS also lacks moral insight. When asked in a recent interview with “60 Minutes” about his excessive lifestyle of expensive yachts, art and French mansion purchases, he retorted saying he was no Nelson Mandela or Mahatma Gandhi. He strives for no moral greatness which hollows out his claims as a reformer. In the same interview, MBS said his father inculcated in him a deep value of history.

If so, he might heed the wisdom of the fourteenth-century North African historian and statesman Ibn Khaldun. Treating people as “instruments” in order to subdue them through war, Ibn Khaldun wrote, is to degrade them. His hawkishness will make Saudis and Yemenis feel humiliated. He is sure to be met with resistance from a seething youth sector and a marginalized religious establishment in his country that are far from being defeated. And regional players will hatch plans to resist him, or worse: attempt to dethrone him.

One hopes U.S. policy-makers will ask MBS to visit the site of the World Trade Center while he is in New York City. The unprecedented terrorist attacks of 9/11 were not just perpetrated by Saudis; they occurred because the US was seen as enabling the reckless agenda of the royal family with total disregard for the political well-being of Saudis, and that of Muslim peoples in the region and around the world.

This perception has not vanished but has in fact metastasized. Given the strategic relationship between the U.S. and Saudi Arabia, all of MBS’s wrongdoings are heaped on the U.S. since he receives the tacit approval of the Trump White House. This means the U.S. still remains in danger emanating from the Kingdom of Saudi Arabia and its homegrown political monsters.

With no foreign-policy adults in the White House—and an inexperienced and unconfirmed secretary of state in Mike Pompeo—one can expect little substantive foreign policy exchange during MBS’ visit. The only winners will be those who conclude back-room business deals with the extended Trump clan and their cronies and with the US arms industry.

MBS has come to stockpile his country against his self-created regional monsters and to invest the monies he recently confiscated from his country’s business elite—even as oil fortunes and futures dwindle. It is time for a sober assessment of whether Saudi Arabia is a strategic ally or a millstone around the U.S.’s neck.

Commentary by Ebrahim Moosa, a professor of Islamic Studies in the Keough School of Global Affairs at the University of Notre Dame. Follow him on Twitter @EbrahimMoosa.