Demagoguery in the Name of the Prophet: Pakistan’s Paradoxes and Paranoia 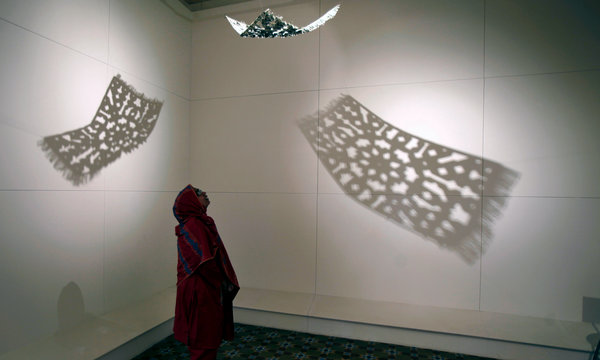 Abdullah Syed’s “Flying Rug,” made of United States $1 bills shaped like American drones and arranged in carpetlike patterns, from “The Rising Tide.

The recent assassination of Punjab governor, Salman Taseer is only a symptom of the larger malaise of religion, in not only Pakistan but also in different parts of the Muslim world. Who can forget the recent gruesome murders of Christians in Iraq and Egypt. But let us not forget that for several years Pakistanis have been murdering each other or were being murdered callously by different kinds of extremists. The country’s intelligence agencies’ reputation has been so besmirched by its own record of dirty-tricks that no one trusts it anymore.

And yes, I am not so naïve to ignore the byzantine political intrigues that might lurk behind these horrific killings, but I cannot surrender to conspiracy theories or ignore the dehumanization in all this.  For my own sanity, and yes selfishness, I have to express my protest, my cri de coeur.

It is thus no surprise that in the current environment prevalent in Pakistan everyone is intimidated. Imagine what an upper middle class mother or father would say to their son or daughter attending LUMS, Lahore University of Management Sciences, or Government College, who might be outraged at what they see happening to their country and might want to do some thing about it: “Beta or beti (son or daughter),” I can hear them say, ” did you see what happened to Salman Taseer? You might have good intentions to save Pakistan but this country is governed from the lunatic asylum. Finish your degree, don’t bother with politics, and we will try and get you somewhere in the Middle East, Europe or America where you can make your life…”  Yes, these caring parents might be protective of their son or daughter. The question I pose to them is: will there be a country left for you to live in? Will you have a future in a Pakistan overrun by crazies? Has anyone calculated the corrosive effects of all this dehumanization on Pakistan and the rest of the region?

The sons and daughters of the rich might go overseas, just as Pakistan’s elites have bank accounts in London and Zurich and foreign destinations to escape to with their dual citizenships, but many more will have to stay behind. To those who will stay behind, I say: you will have to worry about your own security if the admirers of Mumtaz Qadri, the craven killer of Salman Taseer, take over your country.

Even more sickening than the assassination was to see Pakistani lawyers showering the killer with rose petals when he appeared in court. These were the same lawyers who were fighting for democracy and liberty a few years ago, but today they are aiding and abetting murder in the name of the Prophet! Who can be trusted in Pakistan? Criticizing and questioning Pakistan’s blasphemy laws is not to endorse insult to the image and reputation of the Prophet Muhammad. Killing people in the name of the Prophet is a greater insult to the Prophet, Islam, Muslims and the entirety of humanity.

Centuries ago, the great Ibn Arabi, a great admirer of the Prophet and a frequent visitor to the holy shrine in Mecca, the Ka`ba, wrote in a poem: “How can the holy status of the Ka`ba ever be compared to the greater value of a human being.”  Sections of Pakistan’s bloodthirsty multitudes, egged on by the fanatical mullahs would possibly lynch Ibn Arabi if they heard these lines from him today. In Ibn Arabi’s view, a human being is higher than all, for surely the breath of divinity palpates within all human beings. But for today’s bloodthirsty advocates of hysterical inquisitions, the idolatry of their egos is greater than their love for the Prophet.

The irony is that the Barelvi sect is fuelling this demagoguery in Pakistan and the Deobandis are falling in line with this extremism, if Mawlana Fazlur Rahman’s recent uttering reflects the pulse of his sect.  About two years ago an important leader of the Barelvi sect, Mawlana Dr Sarfaraaz Naeemi was killed by a suicide bomber at his mosque-madrasa complex in Lahore, a place I once visited, because he condemned suicide bombing. Earlier in 2010, Mawlana Tahirul Qadri, (no relation to the killer Mumtaz Qadri) aligned to the Barelvis, published with great fanfare a massive tome outlining the horror of terrorism as antithetical to Islam and its teachings.  Does it not occur to the Barelvi leaders that aiding and abetting a mob-mentality and fuelling a psychology of mass lynching are exactly the elements that constitute terrorism?  Tahirul Qadri should speak up. Using terror and violence in pursuit of political ends is terrorism–plain and simple.  There is a flicker of hope for Pakistan when people like Shehrbano Taseer can write fearlessly of her courage to pursue her father’s work. But we should recall that evil flourishes when good people do nothing. Shouldn’t right-thinking Pakistanis take to the streets and reclaim their country and serve as human shields to minorities as Egyptian Muslims have shown recently? Or should right-minded Pakistanis not be on roller skates defending the high values of Islam and reclaim the religious discourse from the hands of the extremists and their equally illiterate leaders? Is it not time that Pakistanis ensure that figures like the courageous religious scholar, Javed Ahmed Ghamidi return in safety to Pakistan from his self-imposed exile in Malaysia, fearing the numerous attempts on his life in Lahore?

All Pakistanis, especially the elites, middle classes and the religious leaders, should recall the words of Pastor Martin Niemöller

In Germany they first came for the Communists,

and I didn’t speak up because I wasn’t a Communist.

Then they came for the Jews,
and I didn’t speak up because I wasn’t a Jew.

Then they came for the Catholics,
and I didn’t speak up because I was a Protestant.

Then they came for me —
and by that time no one was left to speak up.