From the 12-14 of January 2011, I was privileged to be among a group of leading and influential people, thinkers and creative individuals in Saudi Arabia.  Most of the people in attendance were from Saudi Arabia, with few individuals from neighboring countries along with scholars based in Europe and North America.

Hosted by the Sudairy Foundation, the one-day Rahmania Annual Seminar (RAS) 2011 had as its theme “Islam and Modernity” and was co-sponsored with the Institute for Transregional Study of the Middle East, North Africa and Central Asia at Princeton University, headed by Dr Bernard Haykel. While the topic itself has received a great deal of attention in the literature, what I found most rewarding was the opportunity to meet with really creative and visionary individuals from Saudi Arabia in order to exchange ideas.

I must confess that when I was invited I held out fairly low expectations. Over the years my encounter with people from the Gulf area generally, and individuals in the field of Islamic Studies from Saudi Arabia and the Middle East was, to put it mildly, disappointing.  Often the individuals I encountered were haughty in their claim to know everything about Islam, which was often dogmatic parroting of doctrines and teachings without any thoughtful application of history and a sense of the evolution of ideas within Islam. And they were often dismissive of the views of others claiming a monopoly for themselves no matter how wrongheaded and destructive their ideas and practices of Islam. Of course, there were always exceptions, which spoke for themselves.

I was lucky to leave the US at a time when snowstorms partly disrupted air transportation and so I arrived in Riyadh, Saudi Arabia late on Wednesday 12 January. In New York, I was joined by Dr Sherman Jackson, from the University of Michigan, Dr Anver Emon, from the University of Toronto, and Dr Asli Bali, from UCLA all participants in RAS 2011.  We arrived at Badrania House in al-Ghat, some 250 kms outside of Riyadh just after 10 pm.  Tired but relieved to reach our destination, we were warmly received by Dr Ziad al-Sudairy, the key administrator of the Sudairy Foundation and his colleagues.  Dinner was served and soon a lively conversation ensued with Dr Ziad and a leading Saudi lawyer, Abdulaziz H. Fahad, about a range of issues as were joined by other participants.

Suddenly, I realized that these hosts did not only read a great deal about what my colleagues and I had written, but they were well-informed, self-critical individuals who fostered a cosmopolitan outlook and represented a face of Saudi Arabia about which I had much to learn.  Many of them were trained and educated in the United States.  At some point His Royal Highness, Prince Turki Al Faisal, a leading figure in the Kingdom, chairman of the King Faisal Center for Research and Islamic Studies and former Saudi ambassador to Washington arrived. He chatted briefly to a small group of visitors and participants.  Wednesday evening’s engaging conversation set the stage for Thursday’s seminar.

When I sent my first enthusiastic impressions of my encounters from Saudi Arabia via Twitter, many of my Facebook correspondents wanted to know what it was that caused me to gush about this event and the people that I had met.  Well, for starters, one just has to put the hospitality and warmth of our Saudi hosts in a league of its own—they are sui generis.

Among the things that impressed me was the vision fostered by the Sudairy Foundation. 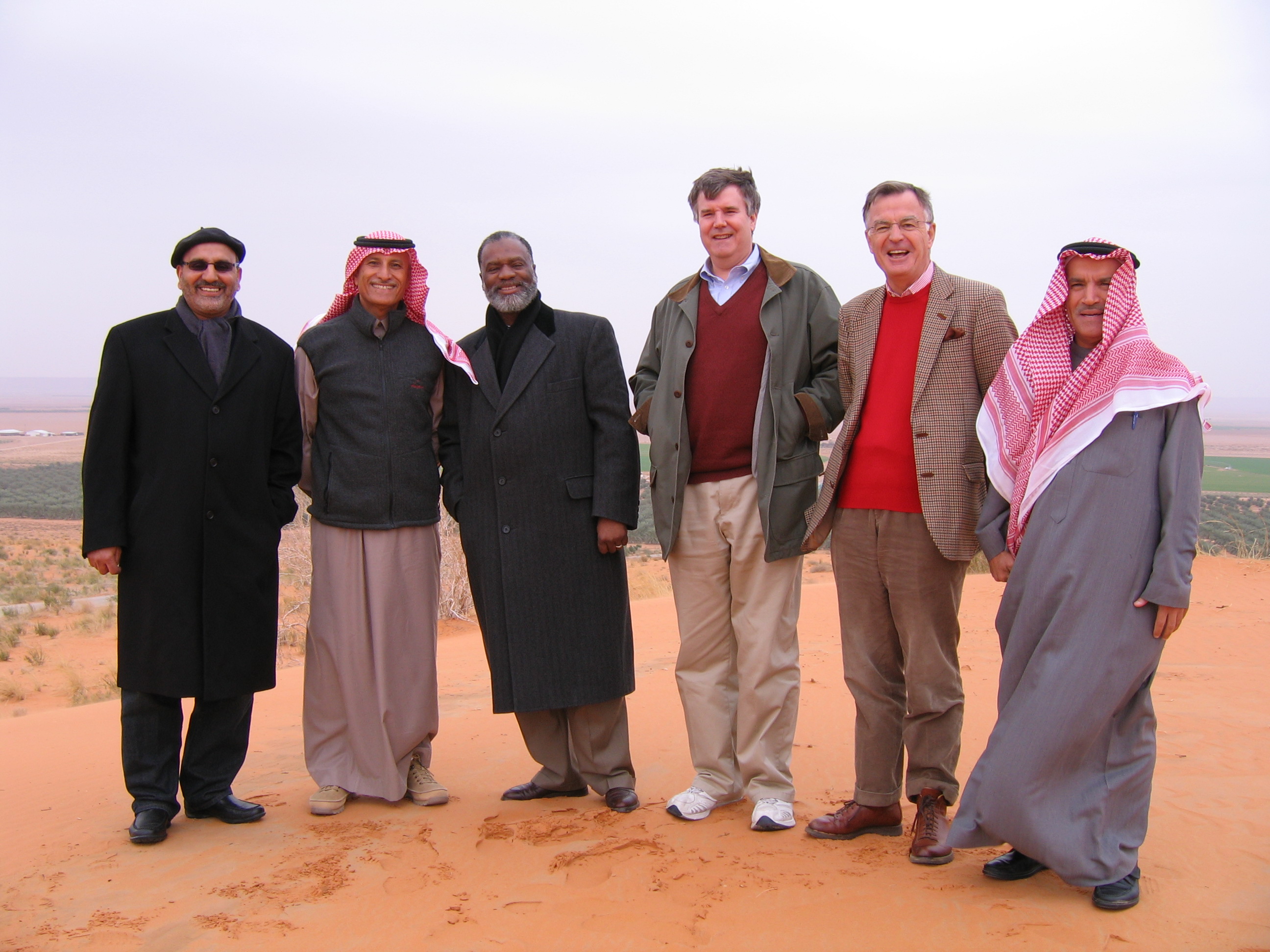 Founded by Abdurrahman al-Sudairy (1919-2006), the governor of al-Jawf province in Saudi Arabia for many years, the current administrators, especially Dr Ziad al-Sudairy, translated their father’s vision into an enormously moving and pragmatic program.  The Foundation has built an environmentally friendly mosque in al-Jawf, as well as a hotel to support the work of the Foundation.  In al-Ghat there is also an amazing cultural center where both men and women enjoy the opportunity to make use of high-quality facilities, have access to a well-stocked library and a luxurious conference center.

What struck me pleasantly was that one of the main goals of the Foundation was not to build a hundred mosques or support pious activities to the exclusion of all else.  Guess what was one of the main projects and goals of the Foundation? It’s goal was to support archaeology and advance the task to unravel the deep history of the region and share it with the rest of the world.  It published the only peer-reviewed and refereed journal on archaeology in Arabic, called Adumatu.  To me that was visionary talk in action. Why? It told me that the Foundation and its architects were interested in the question of culture.

One of the burning issues in the Muslim world is the place and value of culture.  How does one evaluate the work and achievements of humans bearing in mind the limitations imposed upon us by nature and the limits of our own biology?   The work of culture and its relationship to the transcendent teachings of religion is a critical question and one that has evaded a satisfactory response in modern Islam.  To find people who were trying to get to grips with the question of culture was indeed heart-warming.

The people who attended RAS 2011 were truly impressive. We had in our midst people who had their hands on the levers of power in Saudi Arabia as ministers, ambassadors, heads of foundations, academics, business people and representatives of corporations.  The most pleasant part of the event was that in this small gathering, people were truly listening and learning from each other. The Saudi participants asked pointed questions, engaged in meaningful and learned interventions on sensitive questions of religion, culture and politics in a demonstration of talent and care that was different from my previous encounters with people of religion from this region.  Here there were no instances of religious discourse that was moral blackmail in disguise.  At RAS 2011 there was a level of civility, sophistication, dignity and an open exchange that one rarely encounter, save periodically.

Dr Asli Bali explained recent political developments in Turkey and Dr Olivier Roy discussed the state of Islam in Europe and France.  Both speakers received the keen attention of participants.  Both contexts were important experiments about Islam in the public sphere.  Dr Jackson spoke about the racialized nature of politics and culture in the United States, the role of Muslim Americans in such an environment and the challenges this posed to them in the present and the future. Dr Emon spoke about the public debates centered around the question of Islamic law and Sharia in Canada. Participants learned a great deal from both presenters who were enlightened about the nature of religion and politics in North America.  Dr Ghannami from Saudi Arabia spoke about ways to combat extremism by taking back Wahhabism, the predominant discourse of Islam in Saudi Arabia, from the hands of those who would exploit it.  In my paper I spoke of the need to create intellectual space in order to ensure that different views of Islam could be presented with dignity and respect without its authors becoming the subject of heresy trials and violence.  Dr Intisaar Raab, from Boston College, spoke about legal developments in Iran.

The best conversations, of course, occurred over meals and around camp-fires in tents, sipping coffees, teas and enjoying the choicest dates of Arabia as dessert.  On Friday, 14 January, over a breakfast meeting, HRH Prince Turki al Faisal engaged participants on topics ranging from regional and global security to matters of regional politics and I was grateful to him for giving generously of his time.

This was my first trip to the Najd, an important region of Saudi Arabia, both to its current history and to region’s ancient past.  Visiting al-Ghat to engage in conversation with people from different backgrounds, beholding the Arabian desert in its breathtaking beauty and walking among thousands of irrigated date palm trees, left an impress on my soul and mind.  These two days spent in the Najd will forever be memorable days where I saw the rays of a future Saudi Arabia that could make it a beacon of hope despite all the challenges it also faces.


Error: Access Token for eeimoosa is not valid or has expired. Feed will not update.